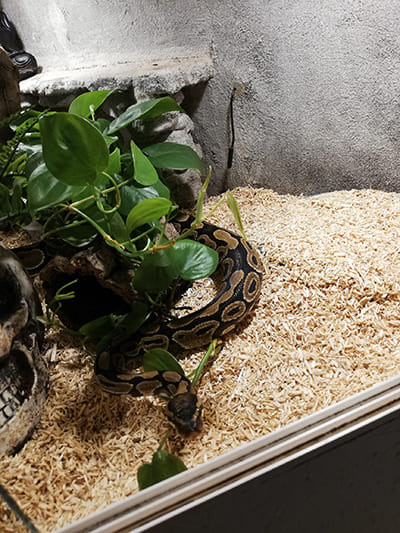 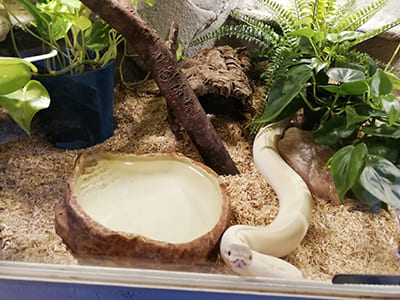 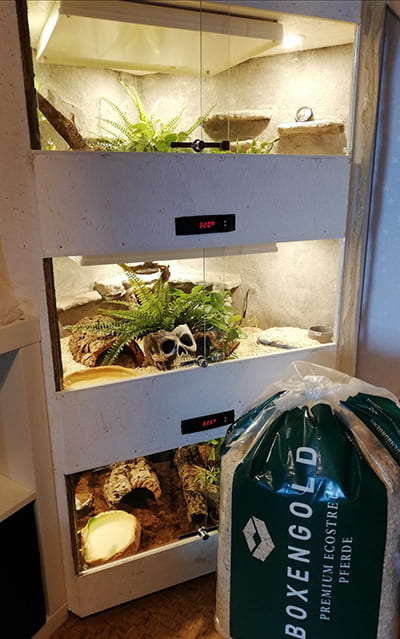 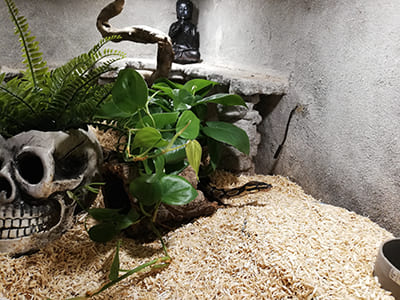 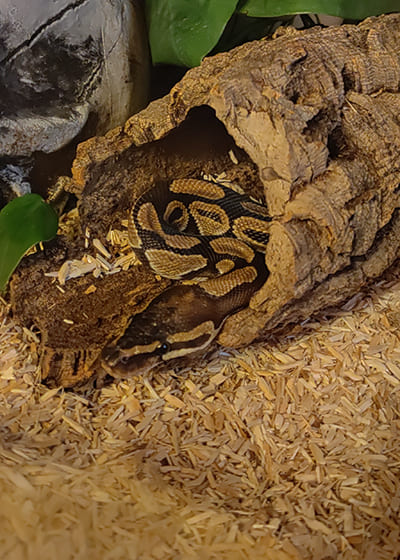 “The 20-kilogram bale arrived very quickly in a perfectly sized box without any filling material. When we opened the bale for the first time, we noticed the pleasant smell and soft consistency of the bedding. It’s compressed, so there’s no dust when you open it. We are allergy sufferers, but the bedding didn’t trigger any allergies at all. So we were very impressed right from the outset.”

There’s still a pleasant fresh pine aroma even though the bedding has been in place for a few days. No unpleasant odours develop because the manure and urine are effectively absorbed and contained, making them very easy to remove. Any odours that do occur are very quickly neutralised. The bedding’s excellent absorbency properties make it ideal for snakes and the perfect place for them to shed their skins because so little of the bedding sticks to the shed skin. As a result, the entire process is very simple and clean.

We got the impression that the bedding had a calming effect on our pets. It was particularly evident in a very restless animal that we got soon after the bedding arrived. Before it came to us, it had been kept on conventional bedding.

When we fed our royal python, we noticed that the entire eating process was much cleaner, and that the snake consumed far less bedding with the food than was the case with coconut husk bedding. That’s because less of the bedding stuck to the feed animal’s coat.

We used around 2 kg of bedding on each floor of our terrarium. During the almost 2-month test phase we didn’t have to replace it entirely at any time, we simply removed the soiled areas and topped it up.

We noticed that the odour in the feed animal cages wasn’t as strong as it is with regular sawdust or newspaper. And we got the impression that it had a calming effect on these animals, too. As soon as we collected them and put them in the cage, they got busy making a ‘home’ for themselves by digging holes in the bedding. The mice and rats also sneezed a lot less than they do with conventional bedding.

Also, we didn’t have to change the bedding as often because of its odour-reducing and containment properties.

I absolutely recommend Boxengold bedding! I’m an allergy sufferer, so bedding was always a bit of a problem for me. Thanks to Boxengold it isn't anymore. The snakes love it. They’ve been shedding their skins without a problem ever since, they're eating well and even the feed animals feel comfortable in it.

We’re already big fans of Boxengold and we’re going to be loyal customers for a long time to come!